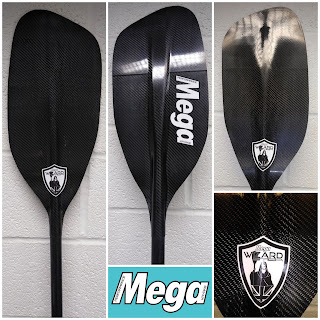 Here is the NEW Wizard Stick paddle from Mega:

Disclosure: I am a Mega Team Rider, and I was given this paddle to review. However, like the magical sitar from the movie Moulin Rouge, I only speak the truth. The words in italics below are the official Mega claims. The rest is me.

Mega are renowned designers and laminators of sexy composite boats, most famous for their surf kayaks (market leaders since 1991), but also sea kayaks, open canoes and even a playboat! Now they are trying their hands at the magic of paddles. Weighing in at just 850g, the new Wizard Stick is certainly a force to be reckoned with. Mine is carbon blade with sky shaft (history lesson about pole-vault poles, Google it), and I've gone for a length that I can use for surfing (but it's a bit long) or sea kayaking (but it's a bit short) or whitewater, for which as you might guess it's perfect! Medium blade (745cm/sq). 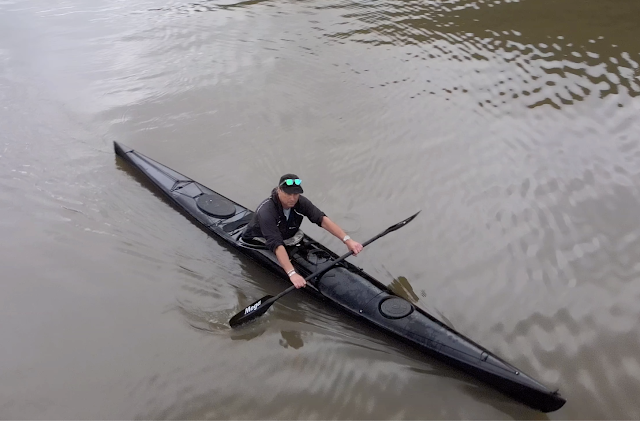 I've snapped paddle shafts before, including a sky pole; one over the deck of the boat 'cos I landed flat from 40', and another by jumping on it. But unless the shaft is damaged already, a more likely outcome is a catastrophic failure of the blade or joint.

"The carbon paddles are made from carbon fibre multi-directional prepreg laminate."

"The shafts are 30mm and inserted into a 70mm long sleeve in the neck of the blade for extra strength."

I can't tell if they're strong, but they look strong. The joint is a bit bulky because the designers have erred on the side of Mega-strong, and the blade looks as if an inch-thick pile of carbon fabric has been put in an autoclave and squashed paper-thin under Mega-tons of pressure. Which it probably has! (See what I did there?)

Hmm, no dihedral... Is this even gonna work? Dihedral is the principle of shaping the drive face like the convex side of a spoon rather than the side you eat from. The slight loss of power stabilises the blade and prevents flutter. The only paddles that don't have dihedral are usually in slalom or other power-hungry applications, and the immense forearm strength of the athletes is relied upon to control the flutter. Until they retire with wrist and elbow injuries. No... we like dihedral.

"The blades are spoon shape tip to tail and flat across the middle plane with a thin profile to bite the water efficiently with no flutter."

Are they now? This doesn't sound right. So I took 'em paddling. The only way to be sure...

I have many sea kayak paddles, from G-stick to long touring Euro blades, but I like to go out fitness training in my Inuk (fast sea kayak) with short slalom style paddles just for the workout it gives me. Enter the Wizard Stick. I put a few miles in on the Tamar estuary where I live. There's no flutter. There's more minor splash and more power than with my slalom paddle. What is this witchcraft? Damn... 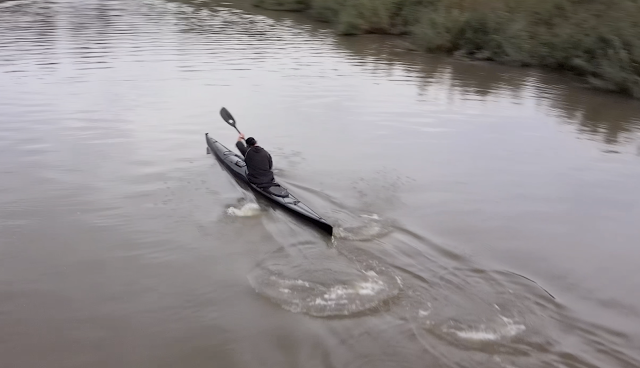 "Very light - almost all flex has been eliminated from the blade, so the power output is immense."

This is true. There is flex in the shaft, though, just the right amount to give the paddle that "living thing" feeling like a wooden paddle and protect my ageing joints! I love sky shafts and have done since Werner first used 'em way back when. They're incredibly strong with just the right (minimal) amount of flex, and the ovals for the hands are much nicer than most. Speaking of ovals, the Mega paddle seems to have less than usual, which worried me until I used them and it felt great!

One problem I've had in the past is with the Skypole having a greasy feel so that I had to use surfboard wax to give me a confident grip. The Mega one is slightly different, with a matt finish almost as if it's been sintered. No grip problems here. 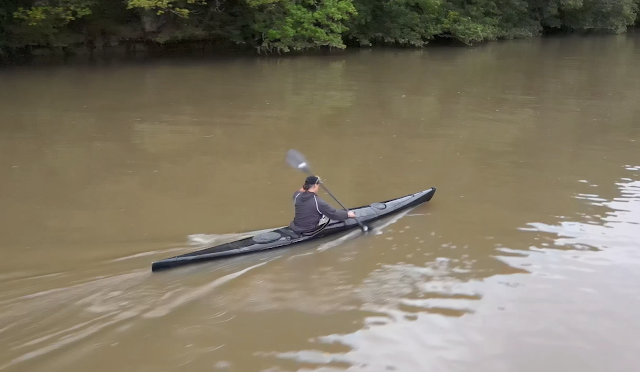 OK, so it's my new favourite paddle. But I haven't exactly tried it in its element. I put the paddle away and kept checking the surf forecast for a day I could a) surf and b) take decent photos, but another opportunity came up first; a massive rainfall on Dartmoor brought the rivers up big, notably the Dart. I was pencilled in to do a boat test, so after the school run, I found myself bowling across the moor with whitewater boats and the new fave stick. 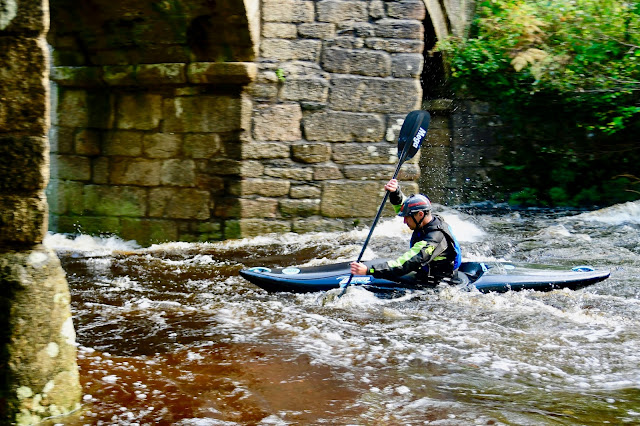 In my head, I was going to get some photos of the boat doing its thing and some of the paddle for this review. With snapper Kate on the bank with a DSLR, I seal launched into the pumping river, painfully aware that I hadn't been on whitewater for a year (or in this boat ever), and a strange thing happened. I forgot about the paddle. Completely. I was thinking about the somewhat general-purpose boat, how to use it, how to get it to surf a wave that most people can't surf even in playboats, and I forgot I had a new paddle. I think this is the best accolade possible. It just works. And I did paddle the surging floodwaters, and I did surf the difficult wave, and the paddle didn't make me adapt or think or anything. 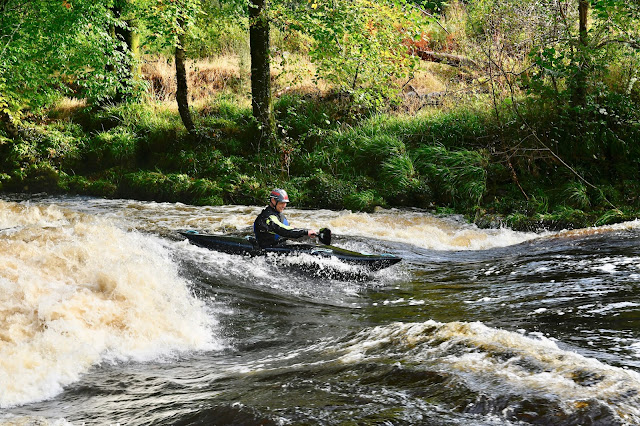 So, perhaps I'm biased or just lucky (probably), but I think it's perfect.

It's also available with glass blades, carbon shafts, bent shafts, bla bla... But mine is the best. End of story.