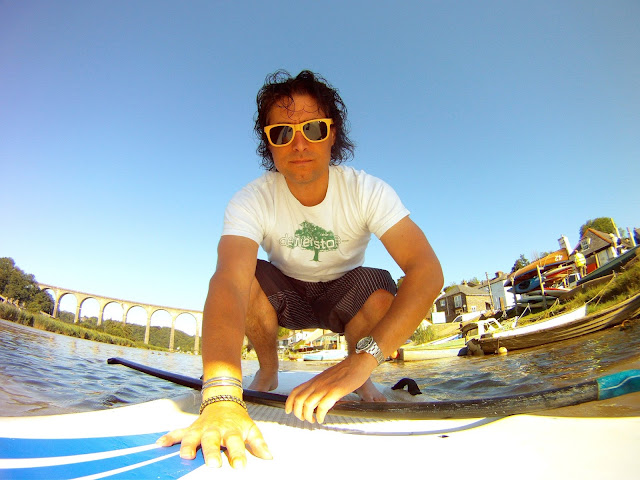 I have always detested the expression "work/life balance". Work is part of life for most people, so "work/play balance" would be a better way of putting it. Life is the whole thing. 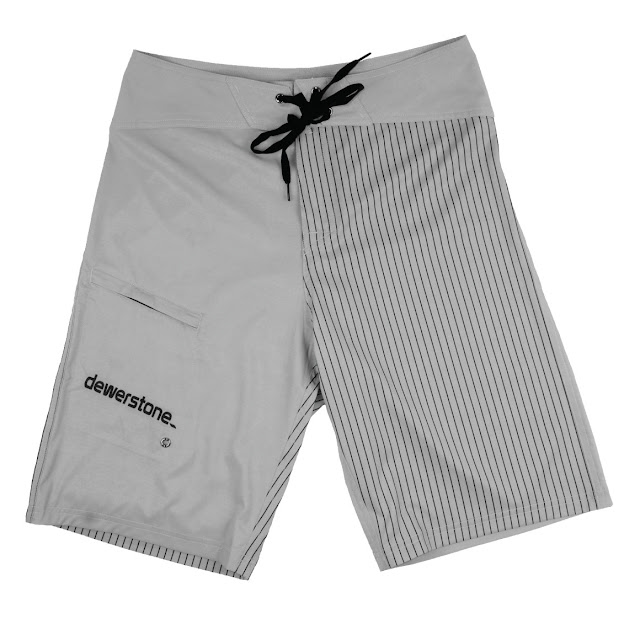 Therefore I was instantly dubious when I first saw the Dewerstone Life Shorts. And I thought "They look like board shorts, and not particularly robust ones at that!" Many is the pair of boardies I've rubbed on rock or reef, so I usually select something that's quite canvassy or otherwise chunky, to ensure their longevity and hopefully my dignity. The Dewerstone shorts are light-weight and seem quite thin at first glance, so I was concerned. 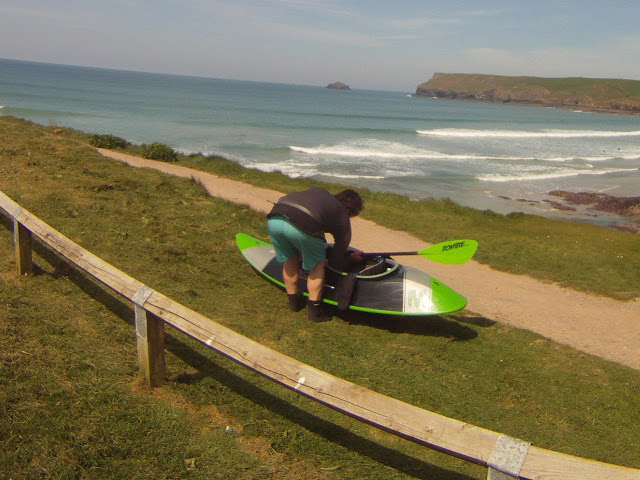 I'm pleased to say that (after admittedly not a lifetime but at least a year or so) the Dewerstone shorts have proved me wrong in almost every department. They are not only tough and tear resistant (even the stretch version) but they are better to wear for most sports because they aren't too snaggy/grabby - whether in a kayak or on a waxed-up board they give the right feel - and slithering over granite or slate has not, so far, made holes in them, or even wear marks for that matter. They are comfy and by virtue of their light weight, they are light and quick-drying and drape well. 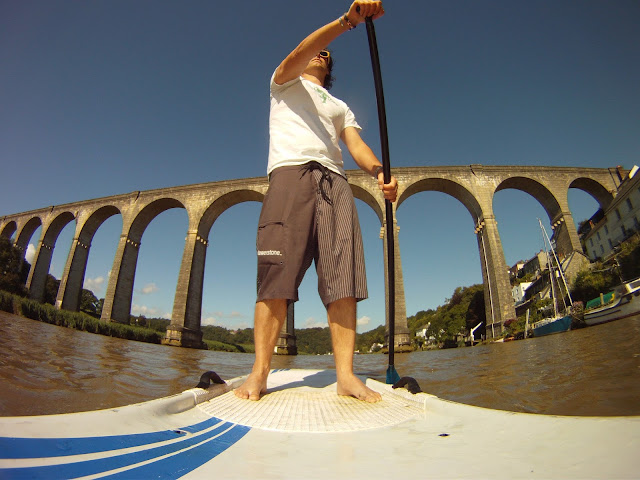 In a perfect world, "Life" shorts would be shorts that I could wear in any walk of life, without having to make wardrobe decisions first thing in the morning or to pack the right stuff for a trip. Sadly that isn't possible. If I wear my Life Shorts for day wear, this necessitates carrying a bag or a jacket for phone, wallet, keys and all the other paraphernalia of modern business. The (excellent) zipped pocket on the shorts is OK for a single key, an emergency banknote or a condom, but it's irritating in the extreme to have a normal bunch of keys or a handful of change in it. For this reason I would call the Life Shorts "play" shorts, but for that purpose they are unrivalled. Everything that would get in the way or be slow to dry on a more practical (cargo-esque) short has been eradicated in the pursuit of great running and jumping, kayaking, paddling or swimming performance. And I'm lucky enough to "play" nearly every day. You might say that's my work ;) 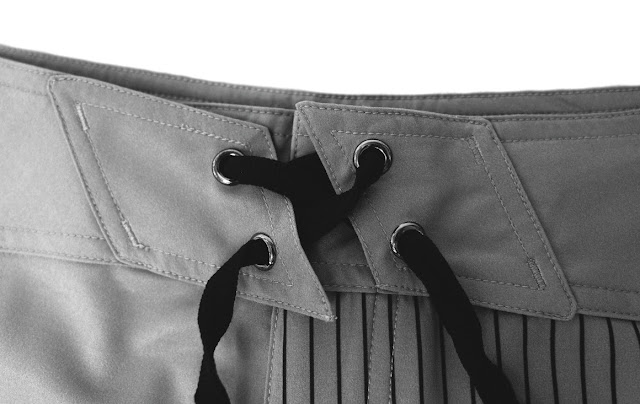 The fly opening and tie is a piece of genius - no velcro to rub or scratch or poke, but access is acceptable when required, and the shorts are neither compromised nor rudely removed by rogue close-outs, hydraulics, or self-styled comedians. Colour fastness has proved excellent - in fact, save for a few rust stains caused by my own carelessness (I leave a steel keyring attached to the pocket tie-loop of my light green pair of Life Shorts at all times), the shorts actually look like new, despite many hours of sun, salt, sand, kayaking, surfing and swimming. And perhaps more relevant, putting them repeatedly through the washing machine. Verdict - Five star fantastic product that defeats all comers at playtime/sport performance and appears to last forever, but if you want to wear them for everyday "life" you may need a handbag/man bag or a jacket.
Available from many forward-thinking  outlets, or why not shop at dewerstone.com !!!
Posted by @itsmattos at 08:35 No comments:

This is going to be controversial. I make no apologies for that.
I've been reading a bit lately about high brace vs low brace . There are a few recent videos online, but of course it's not a new debate - it's been accepted for decades that although the high brace is a thing, it should be eschewed whenever possible in favour of the less fragile low brace position. And that's fine. And also flawed.
Let me explain.
Back in the dawn of whitewater kayaking, or pre-seventies at least, pretty much everyone (generalisation, shoot me) was either a sedentary paddler or a slalom paddler. Sedentary is a word I use instead of recreational, because I hate the expression "recreational paddler". All paddling is recreation, unless you are paid to do it or it's your daily commute. What I want is a distinction between gentle paddling and athletic paddling, and the word "bimbling" has been struck off as not scientific or grown-up enough (bastards), so sedentary is the word I choose.

sed·en·tar·y
ˈsednˌterē/
adjective
Sedentary seems appropriate because a) all kayaking is done seated, and b) some paddlers do it with infrequent, or indeed non-existent, bursts of anything one might call exercise. And that's fine too, I'm not against that at all. Just making the distinction. Again, shoot me.

Back to slalom. The early slalom paddlers used high braces, as well as the Duffek techniques and the now forgotten High Telemark (Google those), and even to this day you can see slalom athletes cranking a vaguely bow-ruddery-draw-thing stroke mash-up back until the top hand is almost behind the head. This sort of behaviour is routinely denigrated by some coaches as certain to cause injury (shoulder strain, shoulder anterior dislocation) and to be avoided at all costs, but the truth is it's likely to cause injury to people who have poor strength and conditioning or are genetically prone to shoulder dislocation. Neither group includes any slalom athletes, so they can be left out of the argument from here on!
In a nutshell - yes, the high arm positions associated with some strokes should be avoided when they are not adding to your paddling functionality. Why take unnecessary risks? But surely more important would be to acquire the kind of musculature that will enable (most) people to perform these strokes when required without undue strain or risk of injury, and to avoid injury in the event that the scenario occurs accidentally.
The way much of the coaching world sees it is currently this. Dislocation or shoulder strain are caused by:

1. Allowing the arm to rise above the shoulder and/or to be forced upwards/backwards.
2. No, that's it really.

The way I see it is this. Dislocation or shoulder strain are caused by:

1. Weakness.
2. Strength - muscle or conditioning imbalance that allows the paddler to resist forces in excess of those sustainable by the shoulder joint.
3. Reflexes - failing to let go with the hand or release core tension instantly when overloaded by external forces.
All three of those are somewhat interconnected of course.
These problems can indeed be circumvented by never adopting the position that puts us at risk, but I think that's a bit of a cop-out. They could be circumvented by staying at home and wearing a straitjacket, too! It was while watching a coach say "Never let your arm get above your shoulder and never let it get pushed back!" that I realised. This is nonsense for dynamic paddlers. I must admit that I'm not in the habit of high bracing, but actually my arm gets well above my shoulder while just carving a simple turn. Take a look at this pic - in my head I am doing a low brace, but in real space both my arms are well above the shoulder, and all the forces are pushing my left arm backwards, even before a few tons of water crashes into the whole situation. Reaching over a big wave, punching a hole, or sometimes boofing, it's equally the case, and in many more complex conditions even more so. Therefore... I require a physique that is able to handle that. And, perhaps, so do you.
Now, you may be thinking that you are much better than I am and that you aren't going to get yourself into these situations. But let me ask you this, if you are a dynamic paddler (and this whole rant is irrelevant if you are not). How do you roll? I can't think of a single paddle roll technique that doesn't involve moving one or other arm into the sort of position we are talking about trying to avoid, while all the while waiting for some unexpected event to push the shoulder joint in the wrong direction. In particular the screw roll, which most people learn first and is the fall-back roll for most when things go wrong. Back in the real dawn of kayaking, the Inuit invented the screw roll, as they did most of the rolls we know today, but they were paddling with a stick that provides very little resistance to the water. It would take a large sea creature swimming into the paddle full tilt to dislocate that kayaker's shoulder.
Another interesting area is sculling for support. This is a super-useful skill, both as a confidence exercise and as a recovery technique when you really, really don't want to go back under the boat. It is often taught in a sort of low brace or low high-brace position, but the truth is it's only useful when you're a bit over-extended and at its best when hanging from the paddle. Great video from Ken here: https://www.youtube.com/watch?v=WDyug_cURao
Some modern coaches teach the "high brace" (using the drive face of the paddle) but with both elbows down so that the stroke is for all intents and purposes a low brace with the paddle the other way up for, I dunno, a bit of additional wrist strain maybe. They do this for reasons of safety, of course. But it's of no comfort when this happens (left).

In conclusion - should you do high high-braces, elbow wrap bow rudders and the like? Probably not... unless you really want to. But whilst being cogniscent of the danger of such gymnastics, it also behoves us to be fit and strong enough to manage the arms in "above and behind" positions of stress, rather than just believing we can avoid the situation altogether.
Coming soon - an article about strength and conditioning for a more robust physique for paddling. In the meantime, don't forget to breathe.